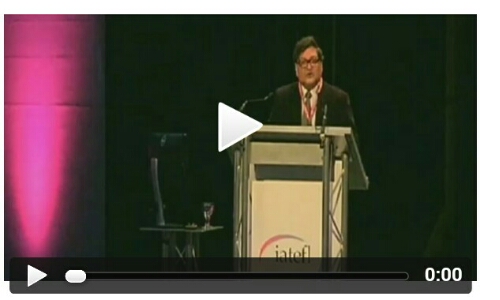 Sugata Mitra delivered the closing plenary at IATEFL this past Saturday in Harrogate. Before the session was over, the Twittersphere started to go berserk. The reaction to his talk was very polarized; either he was being praised as an inspiring visionary or derided as a dangerous neo-liberal shill complicit in the dismantling of the public education system.

I don’t agree with either camp. First, I have to admit that I haven’t watched Mitra’s TED Talk, nor have a actually read the research articles he’s published on his projects (which should be the real basis on which to criticize/laud him; a lot can get played up or lost in a TED-style talk, even if it is dressed up as a plenary address as it was in this case).

I can’t comment on the teaching and learning of science or computer science. But in terms of language learning, what I heard him speak about in his plenary is nothing all that revolutionary. Reducing teacher talk time. Giving groups of students a task and letting them work it out with minimal interference from the teacher. Acquisition of social capital and/or instrumental motivation pushing learning. Production improving when there is a more acute sense of audience. All of his ideas are old hat in the world of ELT; they’re just tweaked and adapted to the particular contexts he described, and delivered in a breathless TED tone.

We have the same concerns about the methods Mitra described as we do when things like TBL and CLT are being applied in the language classroom: is everyone in the class learning, or are certain people dominating? Are the learners learning the right things, and at an effective rate? What happens to motivation to learn when the nature of the social capital being sought after or the instrumental motivation changes, or disappears? How and in what way can a teacher/guide/granny/whathaveyou interact to best maximize learning?

In terms of the broader picture in terms of the future of education, de-valuing and de-professionalizing of teachers, and dismantling of the public education system, everything lies in what Mitra was really proposing. He made a bunch of disparaging remarks about teachers and their usefulness. But was this simply his trying to adopt a humorous presentation style, or is he really proposing we get rid of teachers? Are his ideas simply ways to make do in under-served environments where very little learning is happening otherwise? Or is he proposing them across the board? I think we have to read his articles to find out.

I saw this talk as encouragement for teachers to think about how our role and our methodology should/must evolve in the face of developing technology, how we can best serve underserved populations, and how sometimes dire straits call for drastic measures to get ‘er done. A bit of self-reflection never hurts; nor does a little (or a lot) of debate. Mitra was actually an ideal plenary speaker in this way; better dozens of impassioned tweets than a a forgettable and nap-inducing talk, any day.

This is my space for reflection and conversation on linguistics and language teaching.